Do I need to update my home insurance when I buy something new?

Do I need to update my home insurance when I buy something new?

Nearly a third of Australians (32%) don’t bother calling their insurer when they buy something new and 12% say they never update their policies with specified high value items, according to new research1 by QBE Insurance.

Home Contents Insurance covers the financial cost of repairing or replacing your household possessions, including electrical appliances, jewellery, sports equipment and even toys.

Most contents policies have fixed limits on how much you can normally claim for certain items. For example, your contents policy may only pay up to $1,500 for a piece of jewellery, even if it would cost $2,000 to replace.

Should I update my home insurance policy when I buy a high value or high risk item?

That’s why valuable items may need to be insured for a higher specific value or listed separately under your policy. If they’re not, they might not be covered for their full value or may be excluded from a claim.

“Customers often forget or don’t bother to update their insurance as they buy new items,” says Nicole Cox, QBE Head of Property Claims. “We understand it can be frustrating when some of their treasured items have limited coverage in the policy.”Your home insurance policy product disclosure statement will specify which policy limits apply to high risk items, including works of art, computer equipment, tools of trade and jewellery.

“It’s really important customers look at their contents and ensure they have enough cover to fully replace what they have should it be stolen,” Cox says.“There’s no additional cost to specify high risk items and this will ensure that your insurance policy is doing the job it’s designed to do, which is to protect the things that are important to you and cover the cost of replacement or repair.”

What happens if I don’t update my home insurance policy?

There have been some recent claims where customers have had the maximum amount paid out for particular items, where limits apply, but the actual value of the items far exceeds the amount they were able to claim. Sometimes the value of those items is significantly higher than the level of coverage within the policy, unless the items are specified, says Cox.

One recent customer had their home robbed while they were away at the weekend. Large amounts of cash and jewellery were taken. The claim was settled for $100,000, but this equated to less than half of the replacement value of all the items taken because the customer didn’t specify certain items with limits.

In this claim, the customer was notified by a neighbour that their alarm was going off, so called the police who went to investigate.The thieves had broken into the home through a courtyard window and taken the garage remote which allowed them to steal a BMW worth $250,000 from the garage. They also took suitcases filled with items such as jewellery and tools. The thieves returned later than night and took another car from the garage, jewellery, more luggage and cash.

“Following the break-in, the customers have now spent around $80,000 on increasing security at the property by installing cameras and laser motion sensors.”What happens if my property is damaged during a home burglary?

Home burglary claims more commonly revolve around the cost of valuables being taken from a home rather than damage to the building itself.“Our Building and Contents theft claims accounted for around 10% of all property claims last year, whereas Contents claims accounted for 19% of all claims,” Cox said.Thieves will normally break in through a window or door so the damage to the property on the whole is not too extreme.”This isn’t always the case, however.

In a recent home and contents claim worth $130,000, a property was robbed while the home owners were out for a four-hour period.“The thieves damaged lots of doors, locks and gates trying to get in,” Cox says. “They got in eventually through the front door before searching the whole house. The owners came home to find all their cupboards open and their things ransacked.“The thieves made off with jewellery and other items including Louis Vuitton handbags and Swarovski Crystal, which are items that can be on-sold quickly.”

How can I be more security conscious at home?Taking an active approach to home security is one of the most significant actions you can take to protect your home and things,” says Cox.“Installing window and door deadlocks and remembering to use them, putting valuables out of sight, installing a safe and assessing whether a burglar alarm could be useful to your particular situation, are all worthwhile considerations for increasing your home security,” says Cox.

The stress of being burgledSuffering a home theft can have a wide-reaching effect on customers, over and above financial loss of items.“Our claims team hear from customers all the time who are struggling with those feelings of having their privacy invaded,” Cox says. “The idea of a stranger rifling through your things and taking what they want is terribly stress-inducing for most people.“Added to this is the angst of losing items which may not be worth a lot but have high sentimental value or are a treasured family heirloom.” 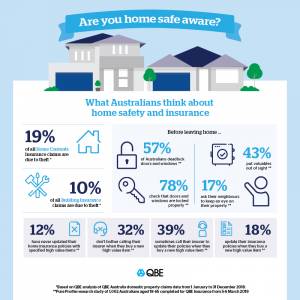